Abstract. Basidiomes of Antrodia cinnamomea are used as a traditional medicine in Taiwan. Because fungal basidiomes are so rare and attempts to cultivate them have failed, the price they command in the marketplace is exorbitant. Here, one dikaryotic isolate from a pairing between two compatible monokaryons obtained from two different basidiomes was able to produce basidiomes on PDA and MEA media at temperatures of 20-28°C within 45 days of incubation. The basidia and basidiospores produced on the hymenial layer were microscopically observed.

Antrodia cinnamomea T.T. Chang & W.N. Chou is a resupinate to effused-reflexed basidiomycete with porous hymenium. It causes wood brown rot of Cinnamomum kanehirai Hayata (Chang and Chou, 1995). Antrodia camphorata S.H. Wu, Ryvarden & T.T Chang has been used for this fungus in the literature but should be avoided because its type material is composed of two different fungal components. Antrodia camphorata is thus considered a nomen confusum with an uncertain nomenclatural status (Chang and Chou, 2004). The fungus is known only from Taiwan and is restricted to C. kanehirai. The basidiomes produced on the infested wood have long been used as a herbal medicine in Taiwan. Owing to its host specificity and rarity in nature as well as effectiveness in curing certain illnesses (Shen et al., 2004), the basidiomes of the fungus are priced high. In the field, the basidiomes grow in the empty rotten trunks of living C. kanehirai and are hardly noticeable until the trees fall down. In order to harvest the basidiomes of A. cinnamomea more easily, some people illegally fell trees of C. kanehirai, an endemic and endangered species to Taiwan, and thereafter, periodically revisit the logging sites to collect the basidiomes. The illegal felling of C. kanehirai in natural forests has severely threatened C. kanehirai. The artificial cultivation of A. cinnamomea basidiomes to satisfy market demand is considered the most effective solution. Although mycelia of A. cinnamomea are easily cultured in/on artificial media, there are no convincing reports on basidiomatal production in pure cultures. Also, the cultured mycelia did not produce certain specific triterpenoids such as zhankuic acids A, B, C, or antcin K, which were only isolated from

basidiomes of A. cinnamomea and are considered to be effective compounds for curing certain illnesses (Shen et al., 2004). In this paper, the basidiomatal formation of A. cinnamomea on artificial agar media is reported, and its teleomorphic structures were also observed to indicate the completion of the life cycle.

Basidiomes and basidiospores of A. cinnamomea from two collections (TFRI B496 from Tona, Kaohsiung and TFRI B502 from Alishan, Chiai) were used for isolating dikaryons and monokaryons, respectively. The cultures obtained from the basidiomes of the two collections were dikaryons. The methodology of Chang and Chou (2004) was followed for the isolation of monokaryons. Pieces of pore surface cut from fresh basidiomes were placed into a test tube containing sterile distilled water, and mechanically stirred for 5 min to obtain a basidiospore suspension. The basidiospore suspension was spread onto modified MEA (0.1% malt extract, 2% glucose, and 2% Bacto agar) plates, and colonies resulting from single basidiospores were transferred to MEA (2% malt extract, 2% glucose, and 2% Bacto agar) as monokaryons after incubation at 24°C for 7-10 days. The mated dikaryons obtained from pairings were made by placing mycelial blocks (2 mm in diam.) of two compatible monokaryons at a distance of 1 cm on MEA plates (Chang and Chou, 2004).

Two natural dikaryotic isolates (TFRI B496 and TFRI B502) and 128 mated dikaryotic isolates, obtained from pairings among monokaryons isolated from basidiomes of TFRI B496 and TFRI B502 collections, were used for test
ing basidiomatal formation on artificial media. Among the 128 mated dikaryotic isolates, 38 and 42 isolates were obtained from intra pairings of monokaryons of TFRI B496 and TFRI B502, respectively, while the others (48 isolates) were obtained from inter pairings of monokaryons between TFRI B496 and TFRI B502. Culture blocks (3 × 3 × 3 mm) of each dikaryotic isolate were placed on petri dishes (9-cm diam.) containing PDA (Bacto, potato dextrose agar) or MEA media to test the basidiomatal formation. Two blocks were placed in each petri dish at a distance of 4-5 cm. Cultures were incubated at 24°C in darkness. Five plates were used for each isolate, and the experiment was performed twice. To determine the basidiomatal formation, macroscopic and microscopic examinations were done with a dissecting microscope (10-20x), a light microscope, and a scanning electron microscope (SEM). Material for SEM observation was subjected to critical-point drying and coating with gold and then examined with a Hitachi S-2400 SEM.

Effect of Temperature on Basidiomatal Formation

Isolate B15, which was able to produce basidiomes on PDA and MEA media, was used for testing the effect of temperature on basidiomatal formation. Culture blocks (3 × 3 × 3 mm) were placed on petri dishes containing PDA or MEA media. Two blocks of each isolate were placed for each petri dish at a distance of 4-5 cm. Cultures were incubated at 16, 20, 24, 28 and 32°C in darkness. Five plates were used for each treatment, and the experiment was performed twice.

PDA and MEA media, only one mated dikaryotic isolate (B15), obtained from a pairing between two compatible monokaryons from TFRI B496 and TFRI B502 basidiomes, produced a porous structure on PDA and MEA media next to the edge of petri dishes in 45 days (Figures 1, 2). This structure and its surroundings retained a fresh reddish cinnamon color for four months, but the color of other areas usually faded in one month. When the porous structure was observed under light microscope and SEM, the basidia and basidiospores were easily found (Figures 3, 4). The morphologies of basidia and basidiospores produced on artificial agar media were the same as those from natural basidiomes (Chang and Chou, 1995). Only vegetative mycelial growth and conidial production, neither the porous structure nor the teleomorphic structures, including basidia and basidiospores, were observed in the other 129 isolates on the same media in 4 months after incubation. Although Chen et al. (2001) reported that A. cinnamomea could produce porous fruiting bodies on a special agar medium, they did not observe the teleomorphic stage. In fact, a loose, pore-like appearance was usually observed on colonies of A. cinnamomea for most isolates on PDA and MEA in the study, but it faded and disappeared in one month. However, neither basidia nor basidiospores were observed. The loose pits might have resulted from water condensation. It should be noted that arthroconidia, which were not produced on natural basidiomes, were observed in all test isolates on PDA and MEA. 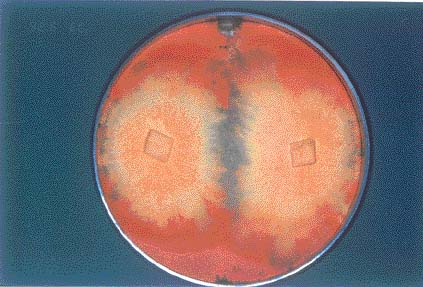 Basidiomatal formation of Antrodia cinnamomea on PDA at 24°C 45 days after incubation.

Chang and Wang — Basidiomatal formation of Antrodia cinnamomea on media 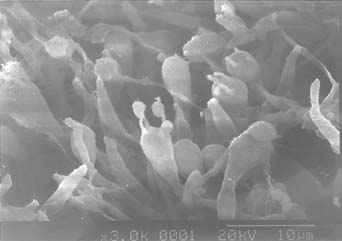 Hymenium of Antrodia cinnamomea produced on PDA medium at 24°C 45 days after incubation.

Basidium with four basidiospores of Antrodia cinnamomea produced on PDA at 24°C in 45 days after incubation. Arthroconidia (A) also observed on the culture.

Effect of Temperature on Basidiomatal Formation